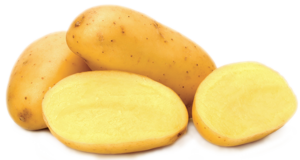 Potato is today the most widely used edible tuber used in the kitchen, but it has not always been the case.

This precious original Anden food was widely cultivated and consumed by Inca, which isolated various flesible varieties. Came to Europe in the middle of the XVI century, carried by the Spanish conquerors of peru and was initially used as animal feed, it took almost two centuries of potato to be claimed as a protagonist in European nutrition, before the poorest classes and peasants, and than as the main ingredient in some refined and elaborate recipes. From the paint of view nutritional the potatoes are famous for their high content of starches and maybe not everyone knows they are also rich in vitamin C, potassium and vitamin B5. Depending on the variety and soil they contain, they can also contain significant amounts of selenium and lithium.

In our terrorism are cultivated and harvester between the months oh may an august.

Legend: ■ Harvest and sale of potatoes

We use cookies to ensure that we give you the best experience on our website. If you continue to use this site we will assume that you are happy with it.Ok